This is SD card interface for Grant Searle's CP/M computer. Originally it has CF interface. 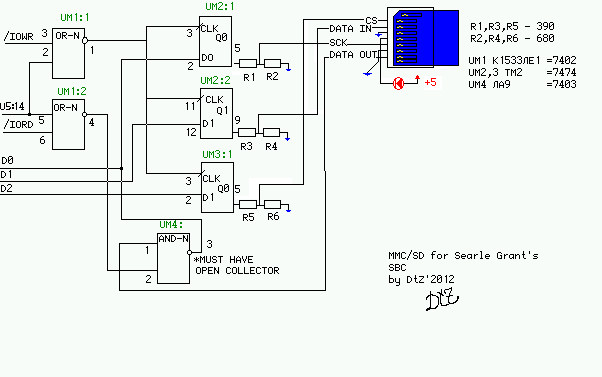 First, it works with some UPD 201409: most! SD cards. Versions before 2491 did not work with SDHC. Still nothing is known about SDXC cards, but I suspect they will not work.
So, for cards are more then 4G you should use SDHC version (read more). It (non-SDHC version) may work with MMC, or may not, I've not tested

If you use cards less then 128M, you will be able to work only with the first disks - saying from A: to C:.

Hotplug is not supported and I believe never will be

Compiling under linux (and generally unix, I've tried MacOSX 10.4/ppc too):
if you do not want to compile, skip to here

First, get tpasm http://www.sqrt.com/ ftp://ftp.ct0.com/pub/tpasm.tgz (or check my site - I probably have a mirror)
Next, install (or check you have installed) TCL, 8.3 and later is ok, maybe 8.2, I do not remember if 8.1 ok. I use it as a part of linking tools (mload.tcl), or you may rewrite it the way you like.
You may want to link C000 based system or CE00 based one.
The clear thing is that CE00 system gives you more TPA. From the other point, if you want to rebuild system on board, you may want to use C000 one.
The trick is that C000 based system occupies first 16K (so starts from track 0/sector 0); CE00 system starts with E00 unused bytes. That's generally not a feature, but bug I'll fix sometimes later.
cd BIOS
./MakeBIOS_CE00
or, for SDHC, cd BIOS
./MakeBIOS_SDHC_CE00

You'll get cbios_CE00.hex (replace CE00 to C000 if you want C000 based system; add _SDHC for SDHC version) and labels.lst
Check labels.lst for you have exceeded 64k. hstBufEnd must be less FF00.
If not, you have to lower TPA (that may happen if you modified cbios.asm for some your's needs). If you have 48k TPA currently (C000 system) and exceeded 64k, you are in BIG trouble (that's not possible if you did not modifed BIOS heavily)
Next, compile CP/M by MakeCPM_CE00 , you'll get cpm22_CE00.hex Clear thing is that SDHC version of CP/M is exactly the same as non SDHC - CP/M does not know anything about that ;-)
Next, create system by ./createimage_CE00 (or ./createimage_SDHC_CE00) , you'll get image.img. It takes some time. It takes significant time on MacOSX 10.4 @ iBook G3/500 !

Making boot media
Then insert your's SD card in reader, find it as /dev/sdX, be very carefull, because if you write this to your's boot drive, you'll make it unusable.
Became root and write filesystem to SD (~16M)
dd if=notempty.img of=/dev/sdX
Next, write the system to the first track of SD
dd if=image.img of=/dev/sdX


Select image with SDHC in name if you write to SDHC cards and image with no SDHC if you are writing to SD card
The distribution may contain different system images (C000 and CE00 to name), number probably indicates TPA, D means debug, avoid it if you no not need debug.

You have two options: either burn an rom image (or rebuild it and burn) or use a loader.

If you are using a loader, start your's SBC, locate some loader.hex in distribution set and paste it into terminal window, then
G5000 it.

I provide an ROM image, it's included scince 2360 release as rom.img, you can burn it.

CPMTOOLS Defs for disk A: of those image: On Solaris/Sparc I access the disk as /usr/local/bin/cpmls -f sga /vol/dev/dsk/c2t0d0/unknown_format , on Linux just as /dev/sdb

Distribution set naming
sgsbcsdYYMV.tar.gz sgsbcsd is the name of the project, YY is decimal years from 1990 (as for all DtZ's software), M is [1-b] month,V is [0-9a-z] release of the file